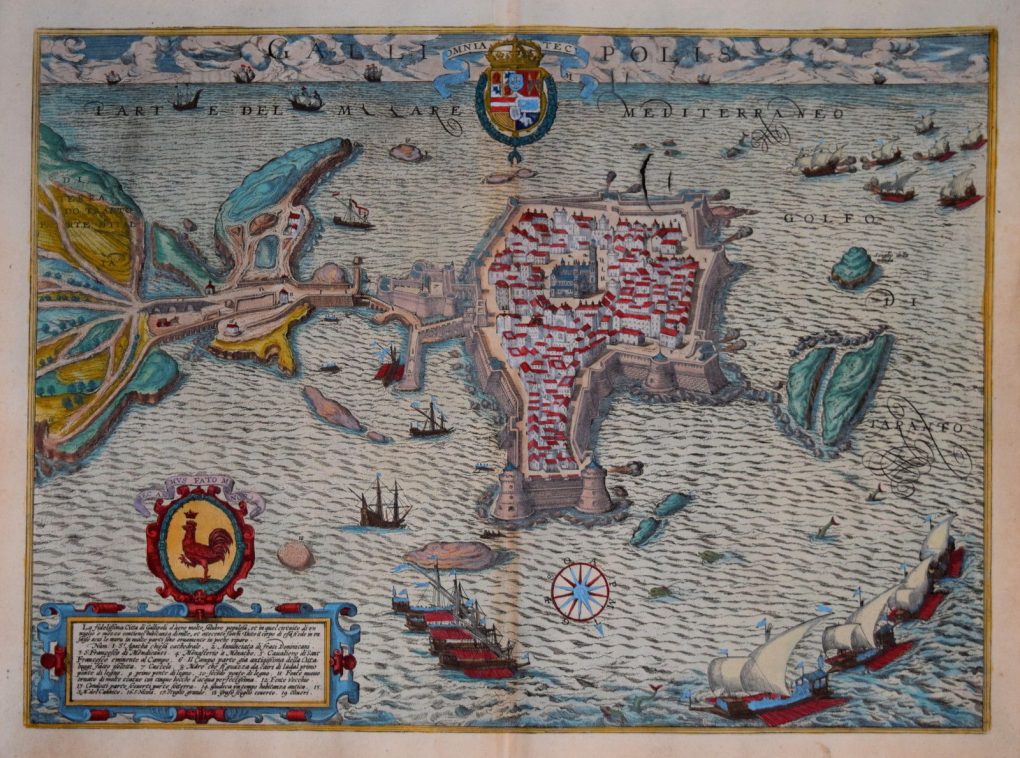 TRANSLATION OF CARTOUCHE TEXT: The most secure town of Gallipoli has very healthy air and is also very populous. It has 1,800 houses within a radius of just one and a half miles. The entire town lies on a rock, well protected by walls, which are also magnificent to look at due to their design. COMMENTARY BY BRAUN (on verso): "Gallipoli lies on a rock and is connected to the mainland by a bridge. At the entrance to the city stands a well-fortified castle, which serves to protect and preserve the site. In addition to other churches Gallipoli has a great cathedral, dedicated to St Agatha. It also has a new fountain, which is decorated with artistic pictures and out of which good and healthy water flows from five pipes for the benefit of the populace. [...] The island that is divided in half by the sea and is here labelled as Number 6 was once part of the mainland, but was severed from the city by the rough seas and has now become an island, which is dedicated to St Andrew." The heavily fortified town of Gallipoli, which lies on a rocky island in the Gulf of Tarent south of Lecce, is presented in a bird's-eye view from the north. The maritime staffage (sailing boats, galleys and dolphins) emphasizes Gallipoli's role as a port near the souther tip of the Salentine Peninsula. At the entrance to the town, still on the mainland, stands the Fontana Hellenistica, or "Greek fountain" (Fonte nuovo, 11), adorned with antique reliefs. Also worthy of mention are the citadel and the cathedral of Sant'Agata (1), replaced after 1629 by a new church in the Leccese Baroque style. Gallipoli's historical Old Town rises on the foundations of the Greek settlement of Kallipolis, whose name means "beautiful city". The small town in the Apulian province of Lecce has preserved this aura even today. The view is made after a copper engraving by Natale Bonifacio di Girolamo(according to Skelton 1956), who was active in Rome and Venice c. 1580. The draughtsman was Giambattista Crispi.