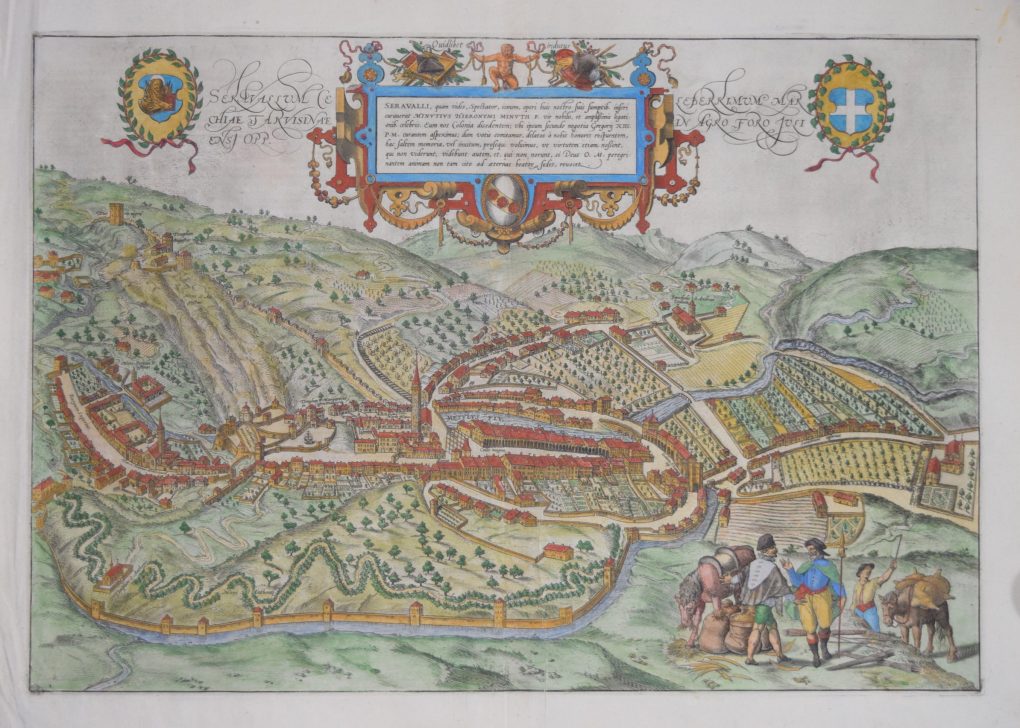 TRANSLATION OF CAPTION: Serravalle, celebrated town in the province of Tarvisianium, chief town of the Forum Juliensis region.

CARTOUCHE: The picture of the town of Serravalle, which you see, viewer, has been contributed to our work entirely at his own expense by Minutius, son of Hieronymus Minutius, a noble gentleman and one renowned for the far-reaching competence of his jurisdiction. We saw him sojourning in Cologne, where he was on business for Gregory XIII; while our good wishes accompany him, we should also like to accompany him on his way with this remembrance, even though it might be against his will, so that even those who have not seen him may learn of his excellence. However, those who do not yet know him will also see his excellence if God the Almighthy does not summon erring souls too soon back to the eternal seat of the Blessed.

COMMENTARY BY BRAUN (on verso): "Serravalle, a market town renowned for cloth, wine and grain, is in such a beautiful situation that the number of its inhabitants, attracted by the loveliness of the place, has grown so much at times that the wall encircling it has had to be enlarged for the third time. The city with the surrounding town once belonged to the Church in Ceneda as an imperial fief. It subsequently became the seat of the Da Camino family (a princely house that at that time was one of the five most noble in all Italy). Now the city is under the sway of the Venetians but is prudently governed by them. For they send only one city councillor with instructions to ensure that justice prevails and to collect duties. In all else, power lies in the hands of the noble families."

The view from the west into the valley shows the town of Serravalle in an idyllic setting in the Alpine foothills and surrounded by orchards. The tall bell tower of St Mary's cathedral stands out at the centre and on the west side of the marketplace is the town hall with the square bell tower next to it that is today the city's landmark. Patrician palaces with gardens at the rear line one side of the square. The loggias of the shops are on the opposite side of the main square. Serravalle's importance as an agricultural centre is emphasized by the figures in the foreground. On the left-hand edge of the illustration is the 8th-century stronghold of the Counts of Camino. The entire city is well protected by the spaciously laid out city walls that extend on up the hillside, where the pilgrimage shrine of the martyred Augusta can be identified. In 1337 Serravalle fell to the Republic of Venice. In 1866 the town was united with neighbouring Ceneda to form the town of Vittorio Veneto. (Taschen)