MICROCOSM OF LONDON – INSURANCE – FIRE IN LONDON AT THE ALBION MILL, 1808. 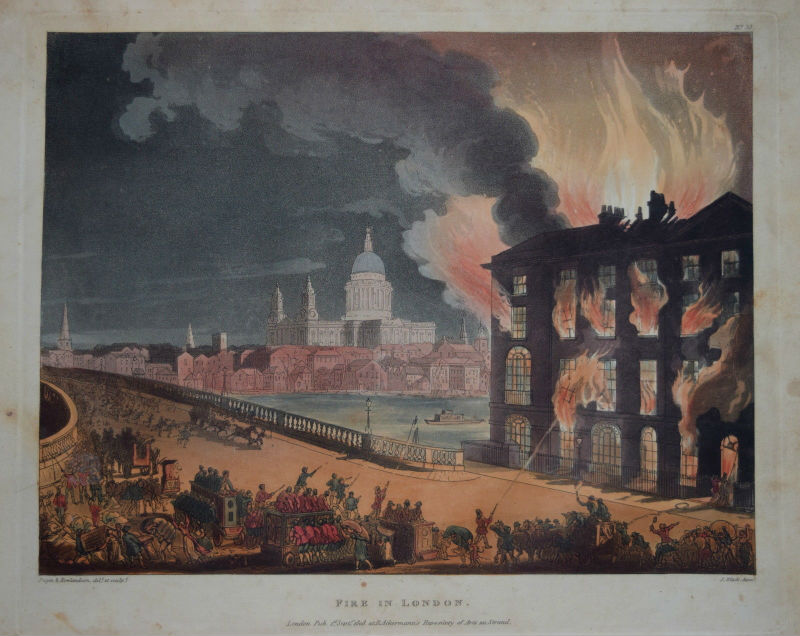 The Albion flour mill opened at the southern foot of Blackfriars Bridge in London in 1786 and was one of the most visible symbols of Britain’s rapid industrial progress during the late 18th century. Designed in a neo-classical style by architect and proprietor James Wyatt the building contained revolutionary steam engines engineered to the designs of James Watt and Matthew Boulton. The sheer power of the engines, which drove twenty pairs of mills stones, promised staggering levels of output in the milling of corn for flour, at a time when London’s rapidly growing population was creating a seemingly endless demand for bread. As such, the Albion mill was widely resented by existing millers in London who were still reliant on water or wind power, and who saw the arrival of steam as a death sentence for their trade. On the 2 March 1791 the Albion mill was totally destroyed by fire, an event that caused much rejoicing in some quarters (which in-turn generated rumours of foul-play). Though poor maintenance was probably simply to blame, the burning of the mill was nevertheless the cause of a popular sensation in London which drew crowds of onlookers to the site for weeks afterwards. The catastrophe also stood as a useful literary metaphor for the potential harm caused by industrial progress. Most famously it is thought that poet William Blake (who lived close-by to the fire) was inspired by the burnt-shell of the building to portray his vision of ‘dark satanic mills’, where the peaceful pastoral godliness of England was shattered by the infernal fires of industry. - British Library.