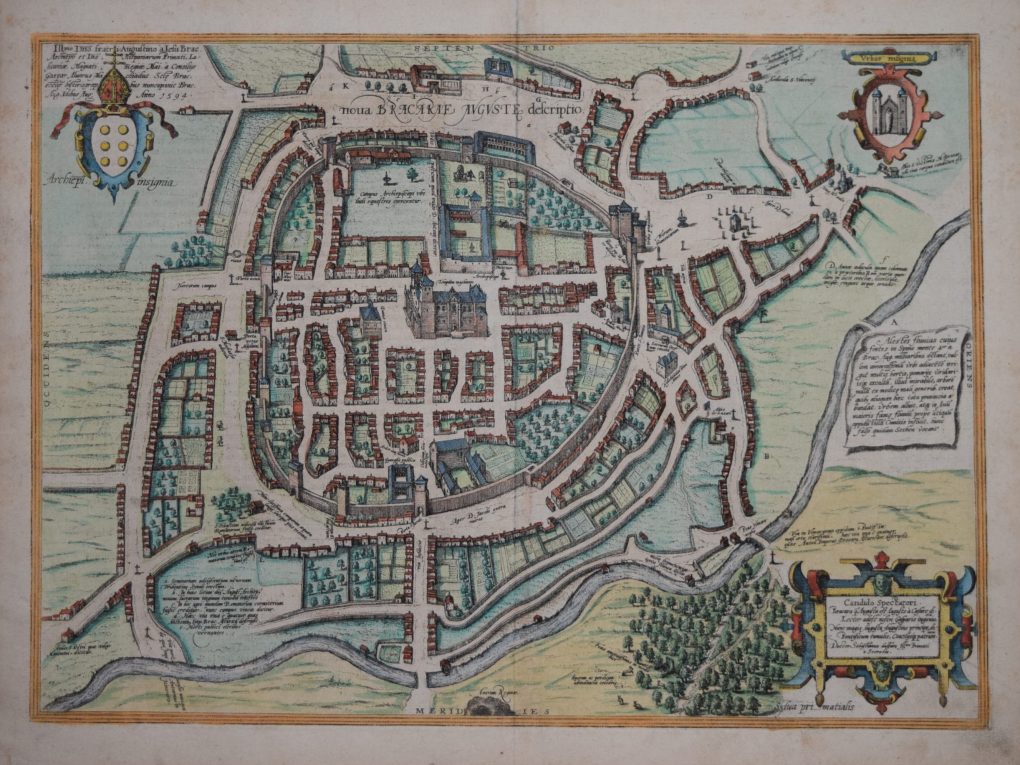 TRANSLATION OF CAPTION TOP LEFT: Gaspar Alvarus Machiadus, historian of the Holy Church of Braga, named the city after the famous lord, the Augustinian friar à Jesu Brac[ara], archbishop and lord, primate of Spain, magnate of Lusitania, counsellor at the royal court. 13 August 1594.

CAPTION RIGHT CENTRE: The River Alestes, which has its source in the Spino Mountains four miles from Braga, irrigates a delightful valley adjacent to the city, in which many orchards and gardens have been planted. It is extraordinary that no lemon trees grow here, abundant everywhere else in the whole province. The river runs past the city and flows into the Avurus, which some wrongly call the Sethen, near the ancient town of Villa Comitis.

COMMENTARY BY BRAUN (on verso): "Braga is considered one of the oldest cities on the Iberian Peninsula and was built in 290 BC. [...] Alfonso I, the Catholic, wrested Braga from the tyrannous rule of the Moors before the other cities of Spain and in AD 740 gave it back its former freedom. Count Henry also lies buried here in a most exquisite church that he himself had built. He was the father of Alfonso the Conqueror, the first king of Portugal."

Braga, which lies northeast of Porto on the Cávado River, is presented in a bird's-eye view from the south. The area was originally inhabited by the Bracari, a Celtic tribe, before being conquered in the 3rd century BC by the Romans, who founded the settlement of Bracara Augusta a few years before the birth of Christ. At the start of the 12th century, after a chequered history, Braga was elevated to an archbishopric by Henry of Burgundy. As Count of Portugal, Henry succeeded in freeing his territory from a growing degree of dependence upon Castile. His son Alfonso I, the Conqueror, continued in this direction and in 1139 declared himself the first king of Portugal. The creation of the see in 1107 also marked the start of construction of the cathedral, illustrated at the centre of the city. (Taschen)