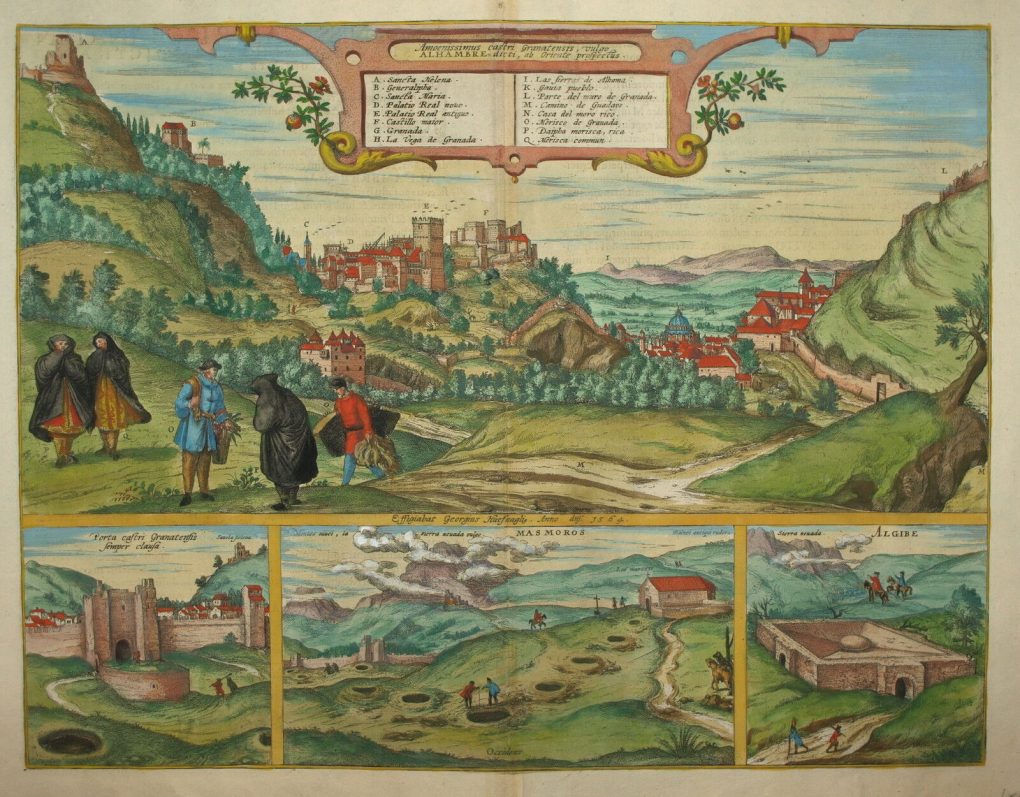 TRANSLATION OF CARTOUCHE TEXT: The delightfully situated castle of Granada, commonly called the Alhambra, seen from the east.

COMMENTARY BY BRAUN (on verso): "Kind reader, as we now describe Granada, it becomes evident that so many parts of the city deserve illustration that it cannot all be presented in one sheet. We have therefore thought to show the royal palace of Granada, called the Alhambra, in a separate view. The Alhambra is an old palace of the Moors, which clearly demonstrates the pomp and splendour with which this people ruled the Kingdom of Granada. For when one contemplates the magnificence of the buildings from without and within, one can only conclude that not only do they not fall short of our own kings and princes, but that they indeed surpass them."

Only on rare occasions does the city atlas of Braun and Hogenberg devote separate detailed illustrations to particular works of architecture, such as in the case of St Mark's Square in Venice and here the Alhambra in Granada. Interestingly, these examples still rank today as two of the most visited tourist attractions in Europe. Hoefnagel divides his double page into four pictures. The top illustration offers a view of the Alhambra on Cerro del Sol Hill, above which are the Palacio del Generalife, the summer palace with its formal gardens, and Santa Helena (A). In the valley bottom right is Granada cathedral, Santa Maria de la Encarnación (G). The Alhambra, which comprises a number of buildings (including the Alcazaba citadel, the Nasrid palaces and the palace of Charles V), represents one of the most beautiful surviving examples of Moorish architecture. The costumed figures in the left-hand foreground are moriscos, who remained in Spain after the fall of Granada in 1492. The view bottom left shows the "always closed" doors of the Alhambra: ever since the Moorish king Boabdil el Chico left the city through this gate after surrendering to the Spaniards, it has remained closed. Illustrated in the centre are the mouths of the Masmoros caves, into which the Christians were lowered by rope every night after a day of forced labour for the Moors. The large structure bottom right is an algibe ((aljibe) , or rain-water reservoir.